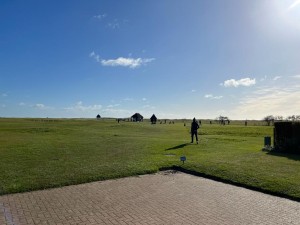 The OTGS were back to Kent for this annual event which normally takes place at the beginning of April. Last year the tournament was played in September due to Covid disruption so it seems only yesterday when we last played this competition. As you can imagine the weather conditions can vary between September and April and we weren’t let down. Only the week before the HH we were enjoying high temperatures and benign conditions followed by snow in Kent the weekend before the Hewitt and 10ºC drop in temperature. So anything could happen.

The draw this year was tough with Ampleforth (three times finalist in 2017/18 and 19), followed by either Malvern or Canford (both formidable teams with good track records). Taunton had 12 players in their team of which 4 were under 30 and 2 over 50, so a relatively young team! As predicted the weather was abysmal with 50mph winds interspersed with wintery showers, however, the weather is a great leveller of the game. After much debate the evening of the first match 10 of the available players were chosen to battle against Ampleforth. Taunton’s 1st Pair, Gary Hector & Phil Stickler, gained Taunton’s first point on the 2nd extra hole (i.e. the 20th). Greg Whalley & Jan Becker overcame their opponents on the 17th with a 2-1 win. Taunton’s 2nd pair (Mark Jenkins & Andy Ford) and 4th pair (Pete Whalley & Dave Higginson) unfortunately lost to their opponents. The match overall was now a tie on 2 each so it was down to the veterans Westwater & Willacy to produce the winning point and this they did on the final hole 1 Up! Taunton win 3-2 beating 3 times finalist Ampleforth in the shock result of the day/week! Extracts from the HH reporter were….“……….I am sure Taunton won’t mind me saying that the shock result of the day was their win over three-time finalists Ampleforth. I am told that this included a 5-putt at one stage – the final putt holed being easily missable. The result surprised the scorers at Deal so much that it initially went down on the website as an away win, (“Taunton 2 – 3?).” Taunton now faced Malvern on day two, again as mentioned by the HH reporter, “……Malvern play giant-killers Taunton in the second round today. The two have only met once before and Taunton were victorious….”. Sadly Taunton lost to Malvern 4-1, although the score doesn’t reflect the fact the two of the losses were at the closing holes, so near misses.

As captain of this side for many years I was proud of how the team played and so in awe at how many teams came up to us and congratulated us on our remarkable win. However, let us not forget this is now the second time in a row that Taunton have been successful in the first round, last year we beat Bishop’s Stortford and lost to Bradfield in the 2nd round. This is a wonderful competition and I encourage all Taunton School pupils past and present who enjoy competitive golf to get in touch. 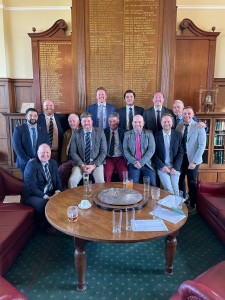 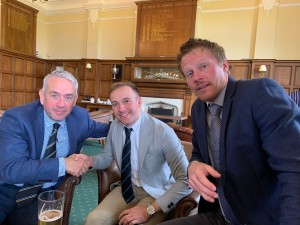 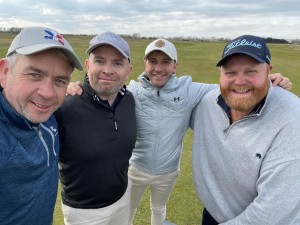