What another fantastic week where the sun shone all week until Saturday morning.  It was a pleasure to have new blood in the team with Phil Stickler, who has a wonderful swing that can compete with the best of Halford Hewitt players.  Four of us started this week of golf on the Tuesday practice day at Royal St Georges, where we haven’t been drawn at for some years so good to be back. 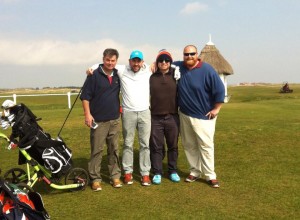 The rest of the team joined us for the Wednesday practice day.  This year we were drawn to start our first round against Uppingham on the Friday which meant we had the luxury of an extra practice day on the Thursday where we arranged a match against The Leys at Rye golf club.  Unfortunately Matthew Pyke had to pull out last minute due to family sickness and we called upon David Morgan to step in, who wanted to retire as a past member of the team, to which I’m truly grateful for.

As per the last three years our first round against Uppingham was close in practice even though the results say otherwise (lost 3 1/2 – 1 1/2).  One match continued down the 19th and a half was agreed on confirmation that Uppingham had secured the 3 points needed, but this could have gone either way.  Of the three lost matches the other two went down the 18th and one was lost on the 17th.

1st round of the Plate was against Merchant Taylor’s, who were runner-ups in 2009, whom we beat 2-1 at Princes.  On Saturday we were drawn against Epsom in the 2nd round of the Plate, who again are a formidable team, whom we lost to 3-0 and Epsom continued to the finals only to lose to  Sherborne.

Despite the end results it was a successful week and friendships grew and new ones were made.