Unfortunately all of the above meetings/competitions were cancelled due to Covid-19.

First OTGS event of the year is being held at Swinley Forest again on Tuesday 10th March 2020.  All day 36 holes (or as many as you want!), lunch etc.  Guests of OT’s also invited.  Please contact David Murrell to be included on the invitation list.

Update:  Due to Covid-19 this meeting was rescheduled to 15 Sept 2020 under Covid-19 restrictions.  Despite these restrictions and limit on numbers it was a great day we were close to the limit with number of players.

Results of the day, the leading OT with 36 points gaining a free entry hopefully on the second Tuesday of next March 2021 (to be confirmed) was G Hallas with 36 points .  R Parsons was second with 35 and gains a half price entry.  The two leading guests earning a half price entry (providing the OT invites them!) were L Hill on 40 points and N Lewis on 37.

Dear All,
On one of the many sunny afternoons sat on the terrace with Simon Hobbs (OT) at Reigate Heath with views of the Surrey Hills to admire with a nice cold beer and chatting away, we came up with the idea to try an arrange a golf day for OT’s again to share this fantastic 9 hole course.  So I have booked the afternoon of Friday 13th of September 2019 to try and make this happen.
Not only is it a fantastic 9 hole course (which plays 18 holes from different tee positions) but we have just taken on Tony Tobin, celebrity chef who has appeared on Saturday kitchen, Ready Steady Cook etc, as our catering provider at the club.   Not only is he providing the club with food but will eventually open the club to the public as a restaurant.
Access to Reigate Heath GC is just off junction 8 of the M25, off the A25 Reigate-Dorking stretch just outside Reigate, rail access is also not bad!!
Number of players we’re looking for are Min 8 – Max 36.
Guests welcome.
The plan for the day runs something like this:
Meet  11:30 – 12:00
Lunch 12:30   (two course meal incl wine)
Golf 18 holes 14:00
Prize giving 18:00 (we have cups available!!)
Cost for the day is looking like £45 for Lunch/Golf/Prizes.  Anything extra on top of that will be the share of bar tab!
Link to course if curious is  https://www.reigateheathgc.com/club_video
REIGATE HEATH

“This outstanding heathland layout is set on the Surrey heathland belt and boasts over 100 years of history and pedigree.  In fact, this course is so good Peter Alliss described it as “a little gem” during his 1980s television series. With different tees for the second nine there is not only a change of distance, but a variation of angle, making some holes dramatically different.”

Fantastic day once again and like last year the weather was dry and sunny.  Initially we had 15 OTs for lunch and AGM and 14 for golf, however, on the day (through no fault of their own) we finished with 12 for lunch and 10 for golf.  Still a good turnout.  We welcomed Andrew Ford for his first OTGS meet and hope to see him in many more events in the future.

Results for the day were: 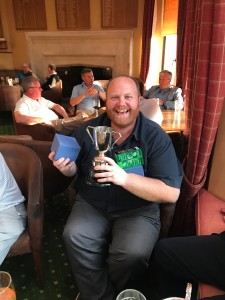 Another year and another tough draw!  This year the HH was held between the 9-14 April.  The OTGS team was looking healthy with twelve potential players that would have resulted in some tough decisions having to be taken by the captain.  However, through unforeseen circumstances two players had to drop out leaving a core ten players.

The weather was looking dry yet very windy and extremely cold with a north wind blowing.  It did get better towards the end of the week.

Taunton’s first match was against Rossall, who were runners-up in 2005, at Royal St George’s, Sandwich at the very early time of 07:45!  This was always going to be a tough match and we lost 31/2– 11/2.  Well done to Jack Malden who won his first match in his first Halford Hewitt.

Thanks to all for making the week once again memorable and to Pete for organising the accommodation, brilliant! 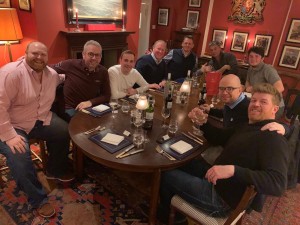 It was also freezing as depicted below. 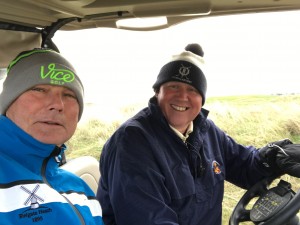 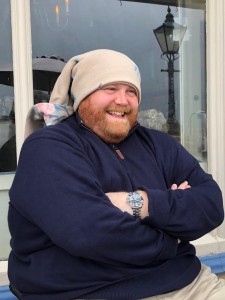 Another great performance by the team and players available to play gave the captain selection problems! Missing from the photo below is Mark Jenkins (Jenks).  Welcome to Jack Malden for his inaugural scratch competition with OTGS. 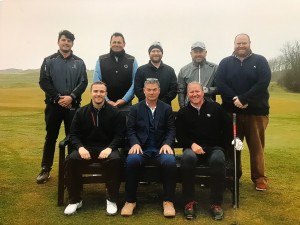 First round versus old Shirburnian, Lost 2-1

First round versus Warwickshire Bears, Won 2-1